In a move that has been hailed by some and lambasted by others, the Union Government today announced that it will be declaring Delhi as a Tiger Reserve. Necessary processes for this have already been carried out, including consultations with relevant steakholders. In a press release issued this morning, it said that while currently there are no tigers in Delhi (other than captive ones in the Delhi Zoo), it plans to introduce a few. It noted that the Ridge Forest of Delhi once had tigers, and so it was a natural habitat for this species.

When contacted about the advisability of such a move, the National Tiger Conversation Authority (NTCA) cited as precedence the move to declare Kumbalgarh Wildlife Sanctuary in Rajasthan as a Tiger Reserve. There too, there was no tiger when this move was made. The NTCA Director said “In Kumbalgarh we faced a lot of opposition from the local Raika community, for whom camels are more important than tigers; we had to ask for an extra budget to deal with such unrest.” For Delhi too, anticipating even more protest, the proposed budget is reportedly double of what would normally be allocated for a Tiger Reserve. Additional amounts will be sanctioned for a tiger safari through the Ridge.

Sources say that while tiger conservation (not to mention, bigger budgets) may be the biggest motive for this surprising move, it may also be aimed at depopulating areas with strong support for the opposition Aam Aadmi Party (AAP). Since, as per wisdom handed down by India’s venerated tigerwallahs, tigers and people cannot co-exist (except when former is being baited and latter is sitting on a machaan taking pictures), large parts of Delhi may need to be evacuated. Plans are reportedly being made to relocate people in neighbouring states, if necessary by clearing forests (though not in existing Tiger Reserves)

The AAP spokesperson, when contacted, said the party was formulating its position. It recognized that Delhi as a Tiger Reserve may attract tourism revenues, but was also suspicious of the true motives of the central government and worried about an erosion in its voting ranks. The Congress Party, true to its stripes, has condemned the move, saying it is ‘short-sighted’. Its spokesperson, a former Minister for Environment who does not wish to be named, said this will reduce the chance of a nuclear power station being set up in Delhi, which was badly needed for India’s carbon neutrality vision.

Neighbouring states have voiced concern over the move, which has created a somewhat tricky situation for the central government. Rajasthan, Uttarakhand and Madhya Pradesh are worried about losing their status as India’s prime tiger habitats, and not too happy about the prospect of housing a few lakh residents who would be moved out of Delhi. The Union Government has promised additional aid for Tiger Reserves in these states, to appease them. NTCA and Forest Departments of these states have welcomed this move. The Raika and other local communities in and around Kumbalgarh in Rajasthan have said they are very happy to give whatever tigers that don’t yet exist in their area, to Delhi, so they can get back their traditional grazing rights.

Meanwhile, the Bharatiya Janata Party (BJP), ruling in the Centre, has also announced that it will generate funds for a massive statue depicting the ‘Made in India’ tiger. This is aimed to be the world’s longest statue (when its outstretched tail is included).  The head will face the upcoming Central Vista, while the tail will point towards Chardham, Uttarakhand’s holiest Hindu shrines. The 2023-24 budget is likely to have a new fund-generation vehicle that, in the words of PM Modi, “will create lakhs of ‘sher-holders’ in this new Statue of Libertiger”. 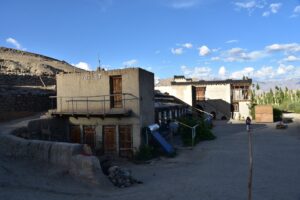 Don’ts and Dos of Ladakhi Loos

PM Modi’s lesson in humility to the nation

Life’s Profusion And The Struggle To Save It